Today, social engineering attacks represent a major primary vector for hackers. As Bruce Schneier said, “Only amateurs attack machines; professionals target people.” Further, client-side software represents a much larger attack surface than server-side software. For these reason, many of the major breaches you read about in the news began with a client-side attack.

In this lab you’ll use two leading tools to perform client-side attacks: msfvenom and the Social Engineering Toolkit (SET). All of these attacks involve creating a malicious payload that you trick the user into executing. Both msfvenom and set use the Metasploit-Framework to create the payloads, and you are on your own to trick the user.

In this section, you’ll use msfvenom to perform a client-side attack. Your goal is to:

Following this, you will play the role of the victim using the Windows VM. You will:

To start, log in to Kali, and start up the Windows virtual machine.

Take a screenshot showing the output of running the following commands from your meterpreter session:

The first command should show the process id related to your trojan pdf, and the second verifies that you are tied to that process. This establishes that you were successful in this exploit.

pgrep AdobeUpdate searches through the output of ps, looking for any line that text-matches the argument AdobeUpdate, and returns the process id. If you were to visually inspect the output of ps, you would notice that the full process filename includes a .exe extension. But the example above does not include .exe in the search term. This is because it is possible that you downloaded the payload file multiple times, which would lead Windows to renaming the subsequent downloads incrementally, e.g., AdobeUpdate (3).exe for the fourth download. Searching for just AdobeUpdate will locate the process regardless of how many times the file was downloaded, assuming that the filename was spelled correctly.

The shell command drops you into a windows shell where you can more easily establish your identity.

Once you have completed these steps, you can close your meterpreter session, but you may wish to leave your /tmp http.server running for later lab parts.

In this section, you’ll use the Social Engineering Toolkit (SET) to craft social engineering attacks.

Take a screenshot of setoolkit reporting the capture of credentials you enter onto whatever site you spoofed. The screengrab should show:

Convenience Tip! The pattern from Part 1 of (1) generate a payload and (2) set up a handler to listen for a callback is common enough that SET gives you a higher-level interface for doing the same thing. For instance, the AdobeUpdate.exe steps in the earlier task could have been replaced with the following in setoolkit:

From the SET main menu:

PowerShell is a powerful scripting language built into the Windows operating system. In this section, you will generate an encoded PowerShell script and execute it on Windows which opens a Meterpreter session on attacker’s machine.

Consider: What ways might you trick a user into running this script?

Take a screenshot showing the output of running the following commands from your meterpreter session:

In this section, you will create a macro-enabled Microsoft Word file that opens a Meterpreter session on an attacker’s machine. Note that this exploits a feature of Word – not an inherent security vulnerability per se. Microsoft explains macros in Word as follows:

In Word, you can automate frequently used tasks by creating and running macros. A macro is a series of commands and instructions that you group together as a single command to accomplish a task automatically.

Because Word docs can run macros, this attack vector will work as long as you can convince a user to open the Word file and enable some settings.

The first step is to create the malicious macro-embedded Word document, acting as the attacker. You will need access to Microsoft Word in order to do this. This part of the lab includes instructions for installing an evaluation version of Microsoft Word into the Windows virtual machine on Kali.

It is admittedly a bit odd to be, acting as an attacker, using the victim’s machine to create a malicious document that we want the victim to run on that very machine, but so be it.

Know that if you tried to use Word on a system running antivirus protection, it would likely prevent you from creating the malicious document, because it would detect that the document contained commands to launch a hidden shell (meterpreter). Rather than disable security settings on a system you rely on, use the lab’s windows virtual machine for the document-creation portion of this lab.

In your meterpreter session on the Windows VM, take a screenshot showing the output of running the following commands:

This will establish that your random gibberish.exe is running, and that your meterpreter process is tied to that process.

See the example below: 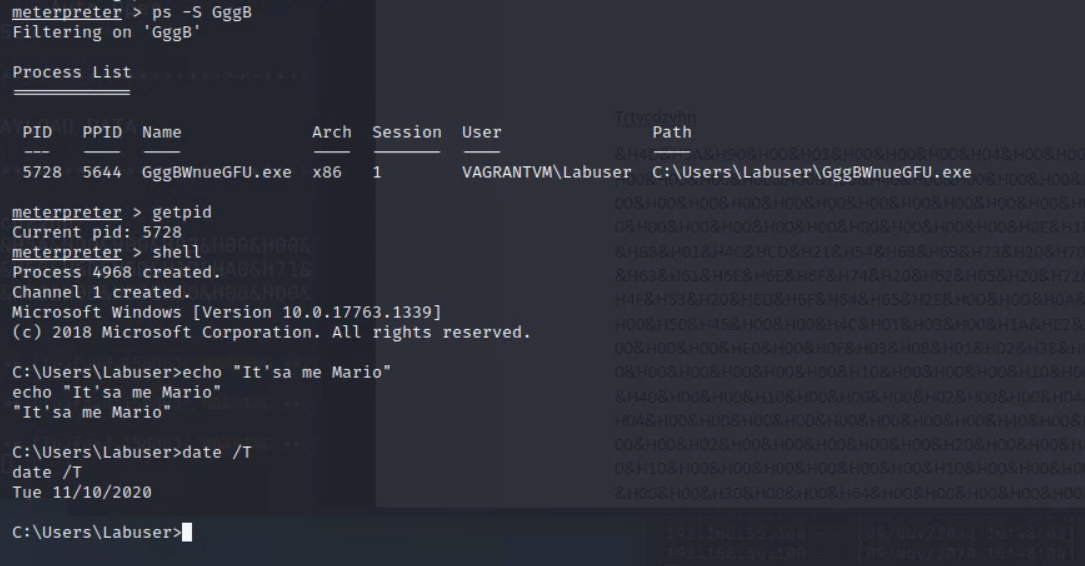 In this section, you’ll use the app SpoofCard to spoof your phone number when making a call. This is a common technique used by social engineers to lend credibility to their calls when vishing. According to Social-Engineer.org:

Caller ID has become a common place technology in both business and home use. Especially with the advance of cell phones replacing many of the phone lines people use, caller ID is part of our daily life. Being aware of this fact and how to use this to your advantage is a must for a successful social engineer.

The basic principal behind caller ID spoofing is to change the information that is displayed on the caller ID display. A few of the points discussed in this framework under authority state that we can use the idea of authority and/or commitment to influence a person. An even stronger presence is the use of credibility. Building credibility can make or break a successful social engineer attack.

See Social-Engineer.org for more information about this type of attack.

In the Canvas quiz, simply indicate whether you successfully spoofed your phone number as described above.